It was early in the morning when we woke for our hot air balloon ride over the Serengeti with Serengeti Balloon Safaris. We unzipped our tent and stepped into the cold morning at roughly 4:30 AM. The sun hadn’t even thought about rising yet. Our campsite was pitch black and hyenas could be seen with flashlights near the campground bathrooms. We had to wait until they had retreated into the bush before we freshened up (safari life problems).

We were picked up at 5:20 AM. It was a roughly 45 minute drive up a long winding dirt road to the launch site. Along the way we were treated with a few hippos crossing the road–their large lumbering silhouettes were outlined by vehicle’s headlights as they trotted from one grassy water hole to another. 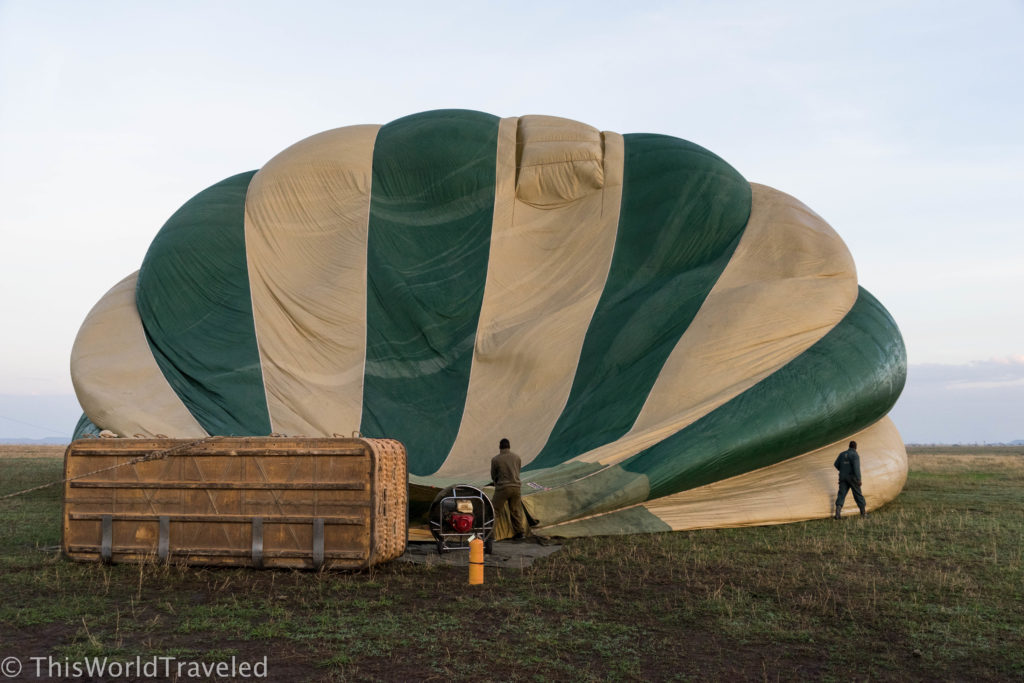 The sun finally rose as we arrived at the launch site spreading beautiful morning rays across the Serengeti. There were two large balloons with their baskets laying on their sides and envelopes deflated.

An armed guard was present. He seemed to be there to either protect the guests from wild animals or other people. We didn’t ask which but his rifle didn’t look fit for hunting. 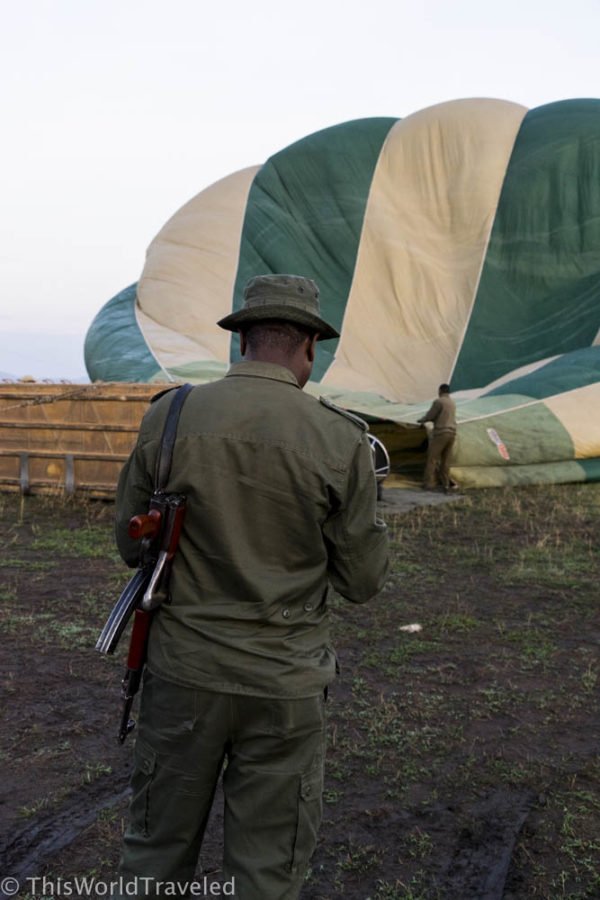 The crew began to slowly inflate the balloon’s envelopes and the guard video recorded it on his iPad with his rifle slung over his shoulder–a bizarre juxtaposition that added to the exotic wildness of the african grasslands. 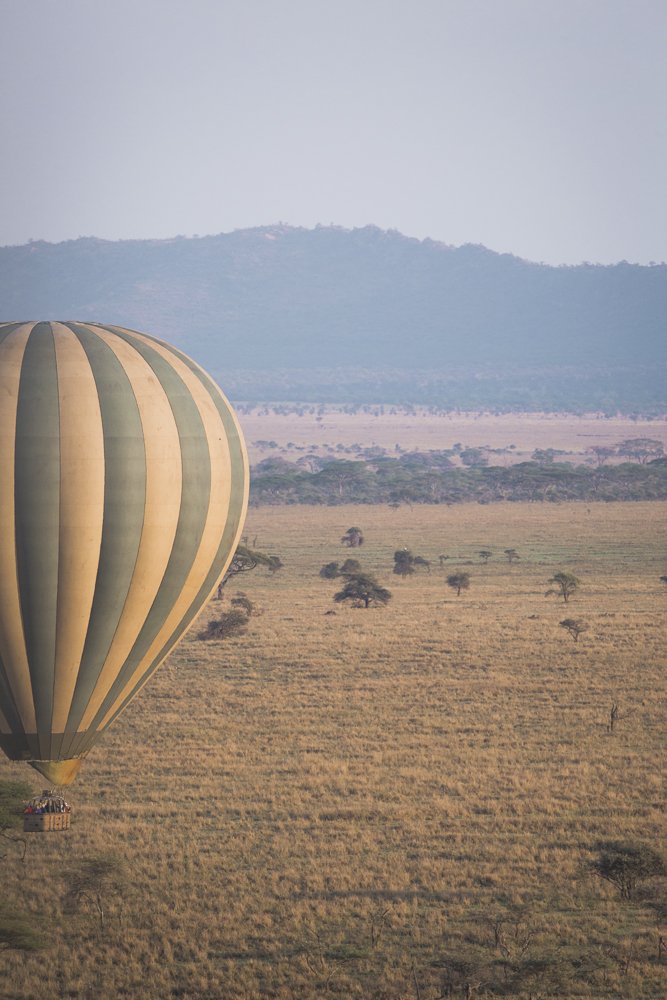 By nature of the price, the balloon ride seemed to attract a higher-end clientele. Our fellow passengers weren’t dressed in safari gear like us. They were far more put-together and didn’t give off a camper vibe, but everyone was very nice. Some of them were newlyweds and some were older adventurers staying at local lodges. 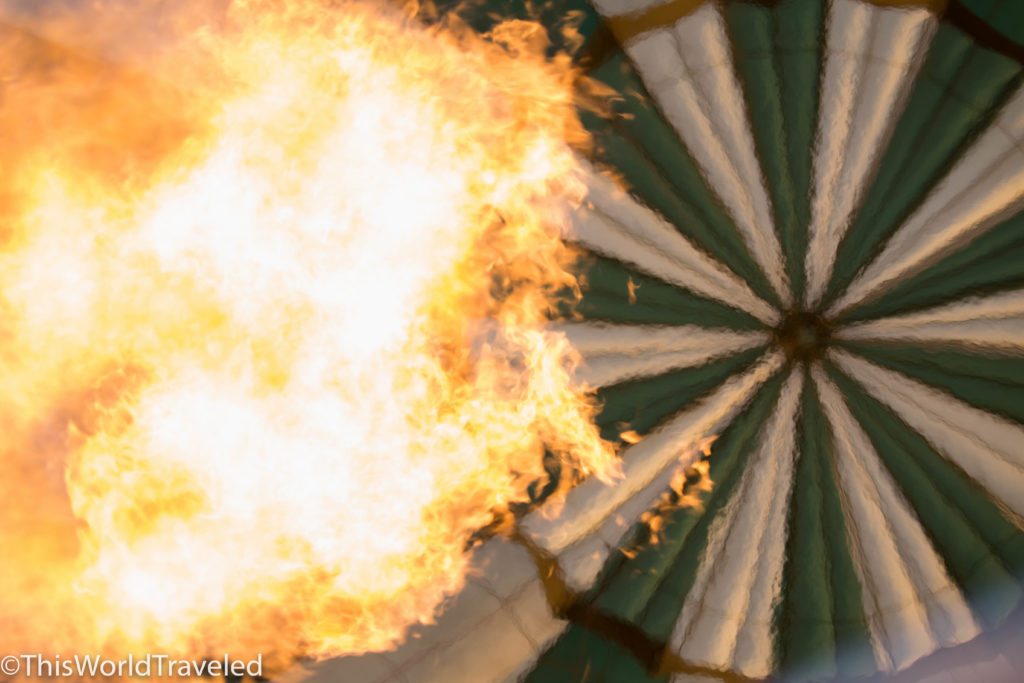 After a quick safety briefing we climbed in to the basket one by one. It was laying on its side so as we waited for the balloon’s envelope to fill with hot air and launch us into the sky, we were sitting sideways.

Our cameras were in our laps and we were all very excited. As the balloon took shape and life, the basket tipped up straight and began to slide along the grass. A few moments later we were in the air–safely and smoothly. Soon, we were high above the grasslands and flat topped acacia trees. 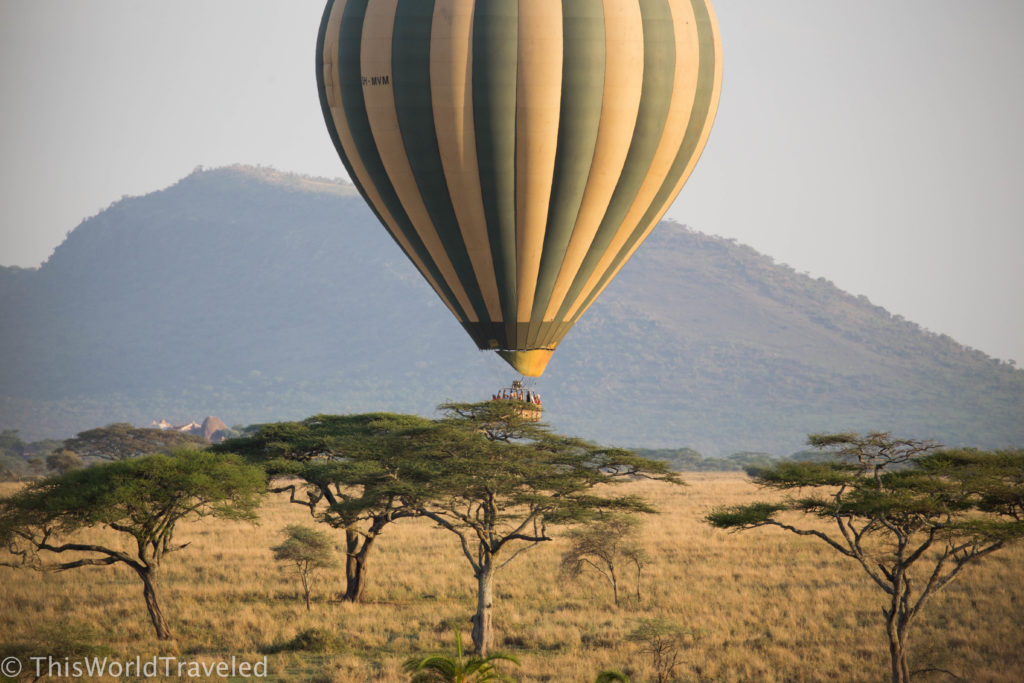 Our flight was around 60 minutes. We got some great shots of our sister balloon and the grasslands that stretched to the horizon. The morning sun bathed everything in beautiful golden light.

We were even lucky enough to see a leopard, sitting in the grass, staring at us as we floated past it. I imagine we must’ve looked strange to the beautiful cat–hanging over the baskets edge, with our long lenses pointed down at it. 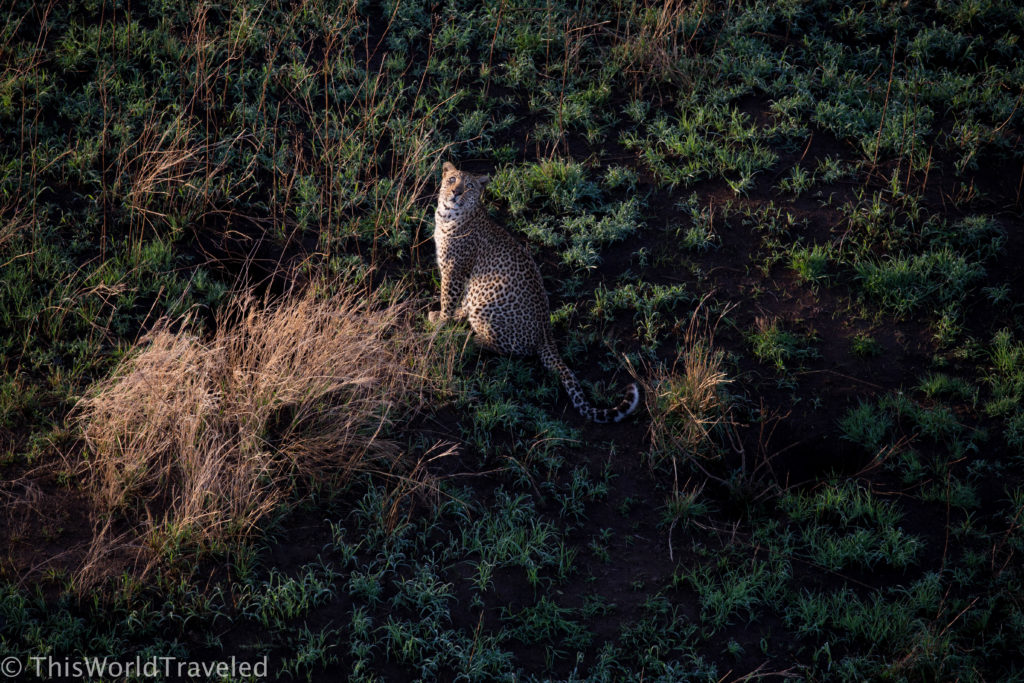 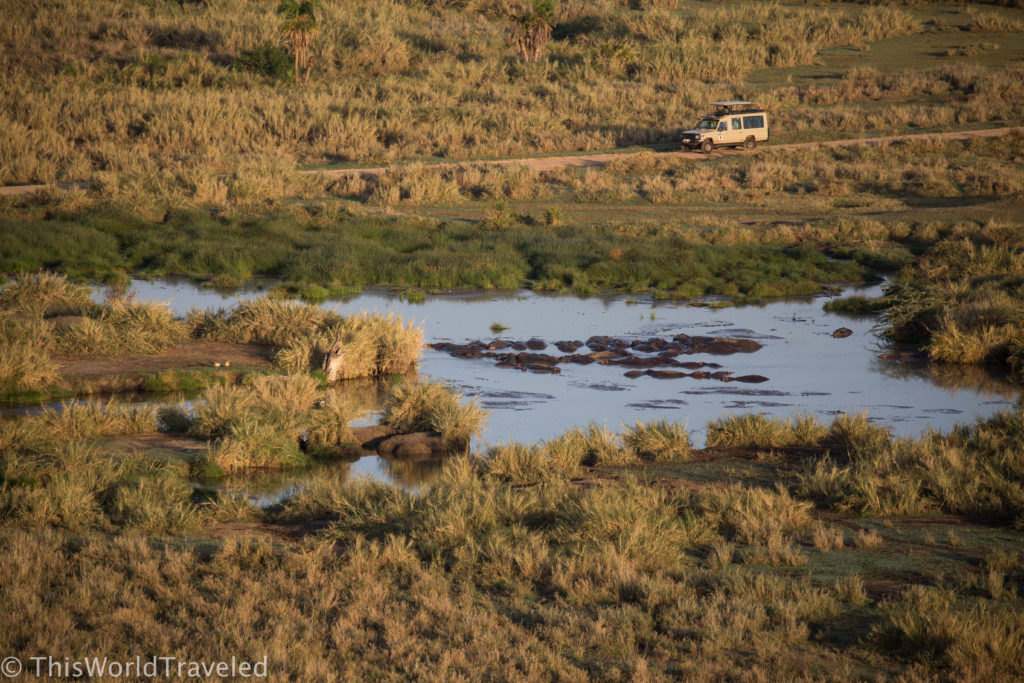 Every so often we dipped down to just a few feet above the ground and grass and brush would strike the bottom of the basket. 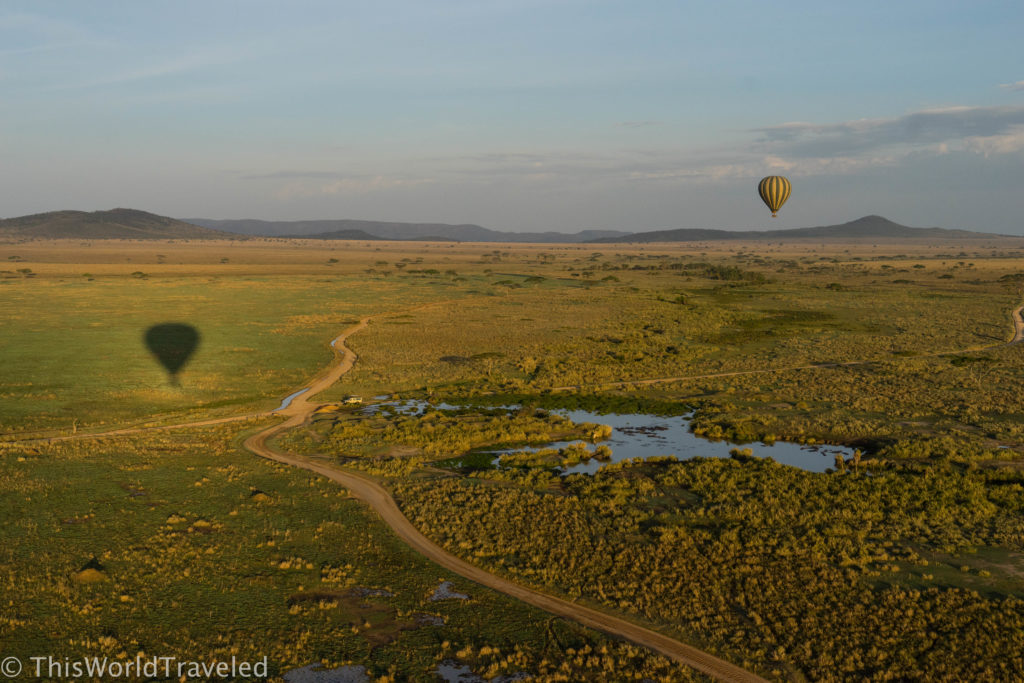 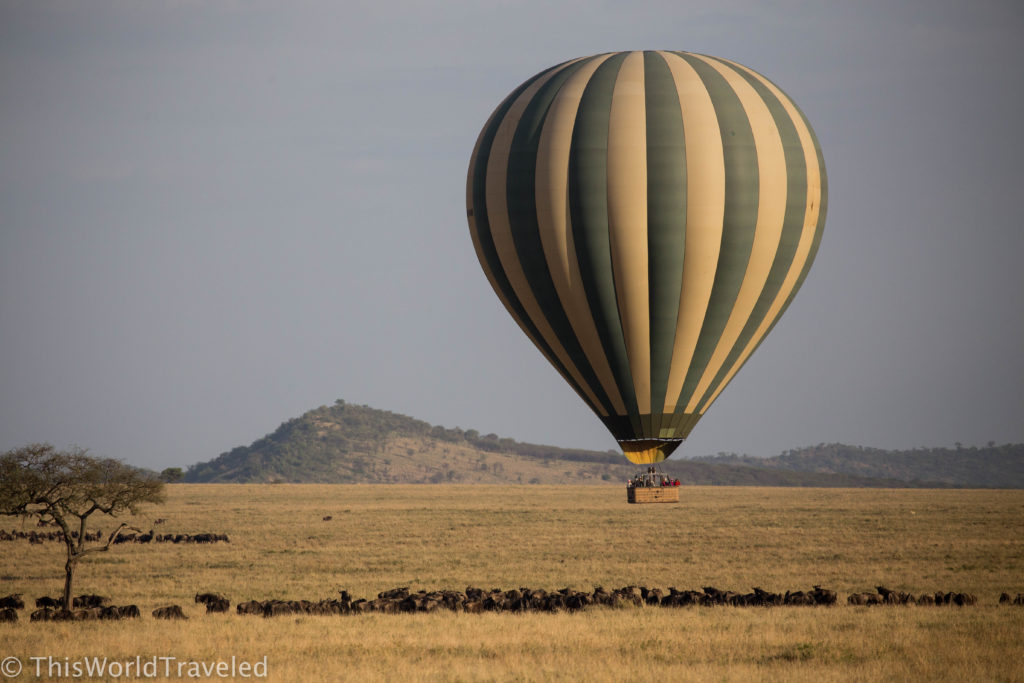 After a strikingly soft landing, we were given champagne for a toast. Drinking ‘bubbly’ is a tradition after a balloon flight. It apparently dates back to early balloon flights in France where pilots would bring Champagne with them to appease potentially confused and angry locals upon landing. The pilot of our balloon gave the traditional toast below:

The winds have welcomed you with softness

The sun has blessed you with its warm hands

You have flown so high and so well

That God has joined you in your laughter

After we’d finished our glass (or two) of Champagne, we were driven about 20 minutes to breakfast. We arrived at a grassy area with a single tree and two long tables. 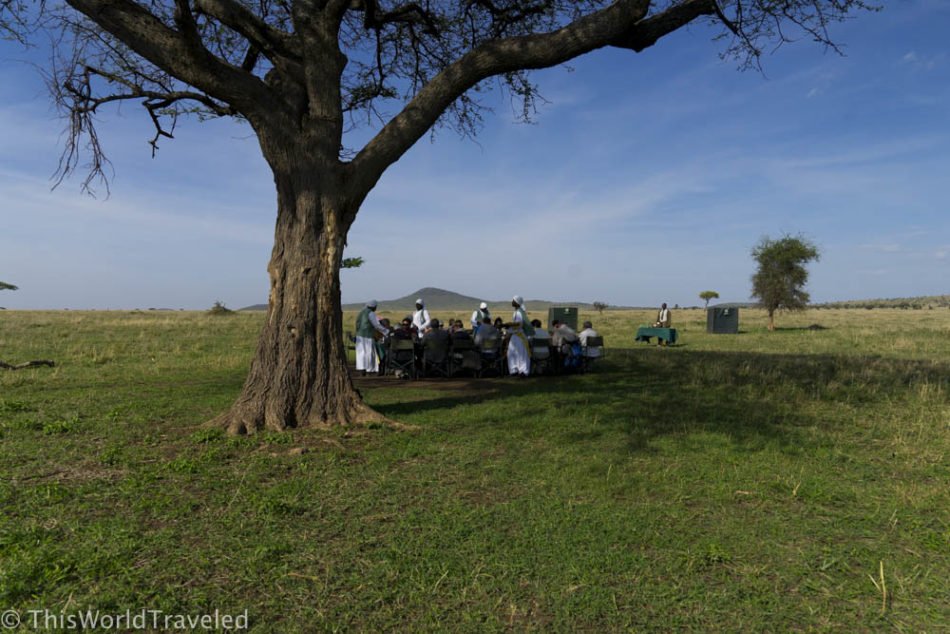 The crew of the company were wearing what appeared to be colonial servants’ outfits (which made us feel slightly uncomfortable and was the only thing distracting from what was a very enjoyable experience). The breakfast served was pretty good: eggs, bacon, sausage and fruit.

There were to two toilets set up with curtains around three sides. The fourth side was hidden from the other guests but open to the Serengeti and any curious animals that might want a peek. A sign on the toilets said ‘loo with a view’. A company crew member (dressed as a servant) stood near the bathroom with a bowl and a pitcher of water to poor on the guests hands when they had come back from using the loo. We made certain to tip this man the most before we left. 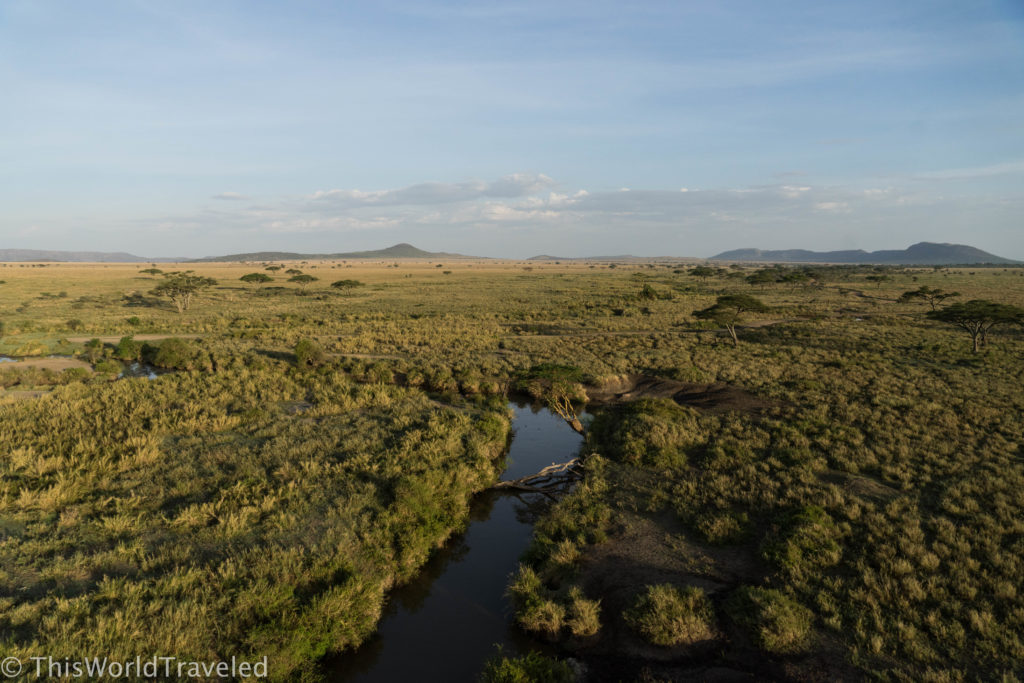 All in all, we had a very pleasurable experience and left with many great photos and some good video. We would recommend this company to others and would do it all again if we had the opportunity. 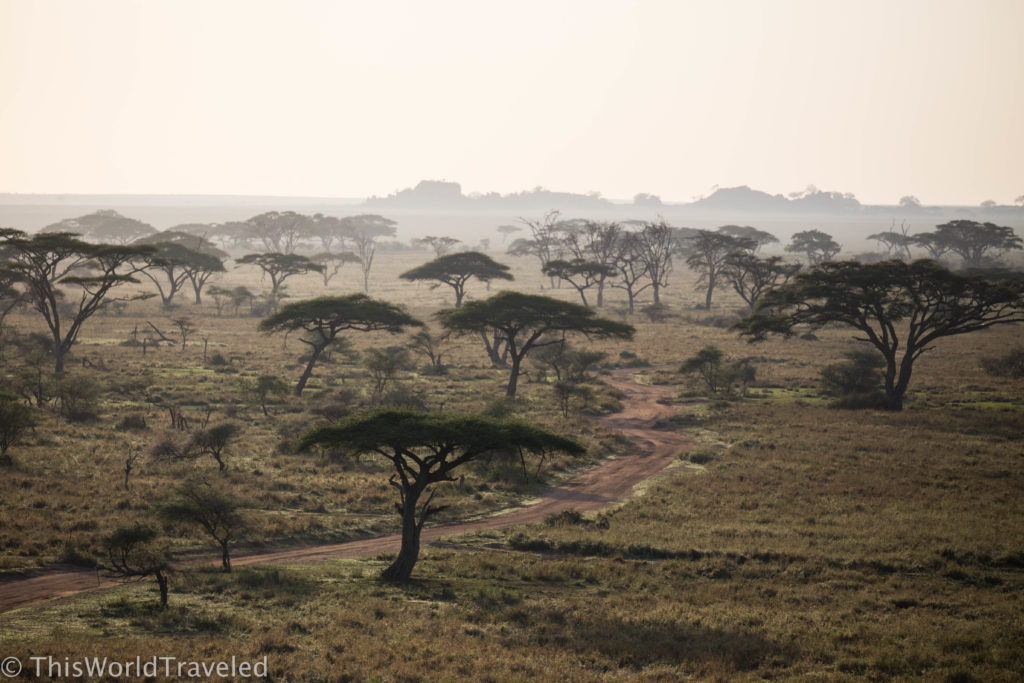 Tips before your Trip

Disclaimer: This World Traveled is a participant in the Amazon Services LLC Associates Program. An affiliate advertising program designed to provide a means for me to earn fees by linking to Amazon.com and affiliated sites with no extra cost to you.

You’re going to want a zoom lens in case you see animals. As well as, a wide angle lens to capture the beautiful terrain. We used a Canon 100-400mm L IS USM II and a GoPro Hero 7 with the jaw clamp attachment.

You can bring a small backpack, our favorite is the Fjallraven Kånken, with you to stow away camera equipment or jackets. 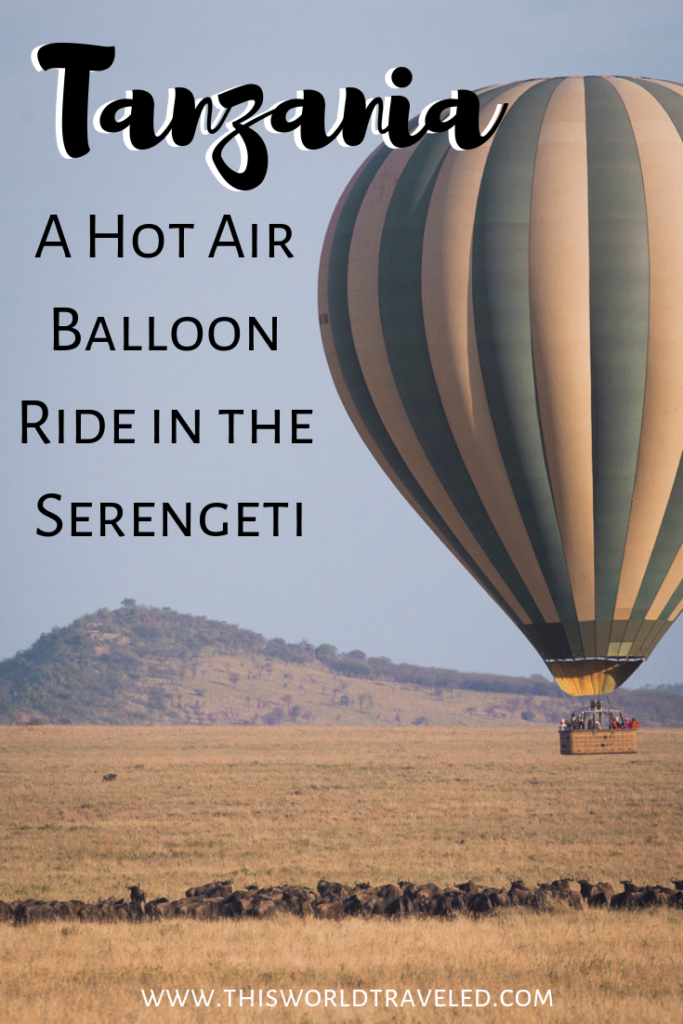 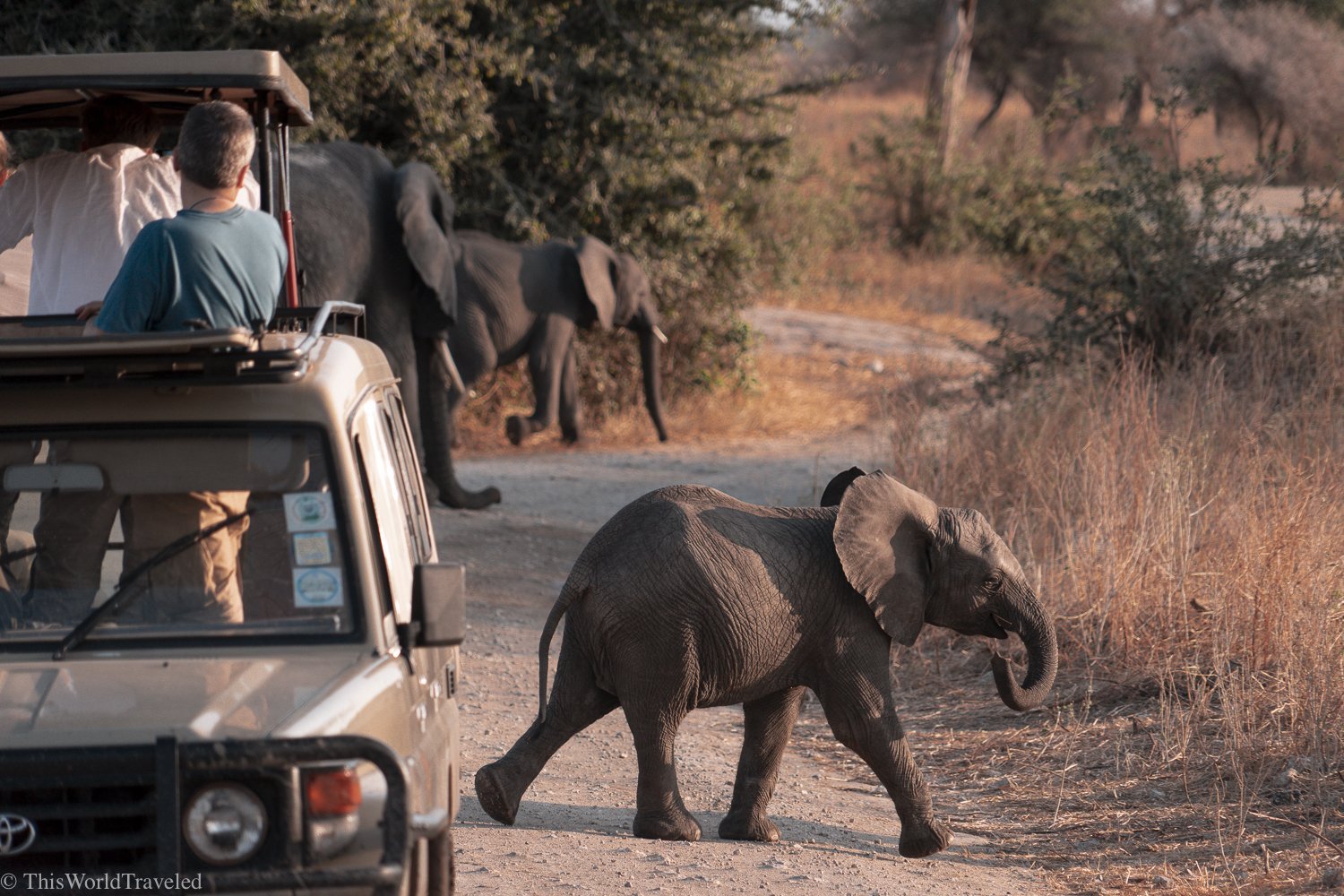 Safari in Tanzania: How to Plan the Perfect African Safari Vacation 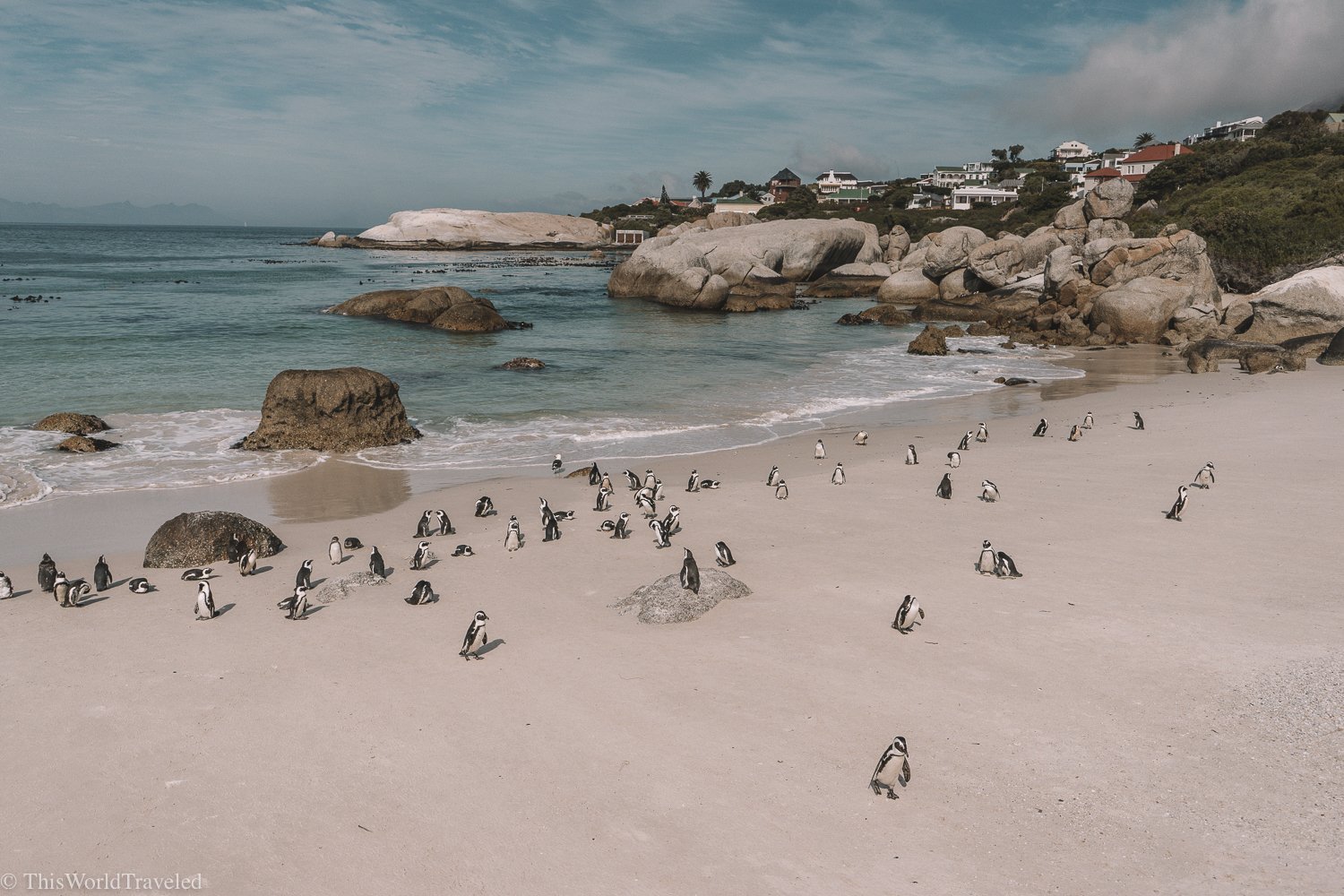 The Best Encounters for Animal Lovers Near Cape Town 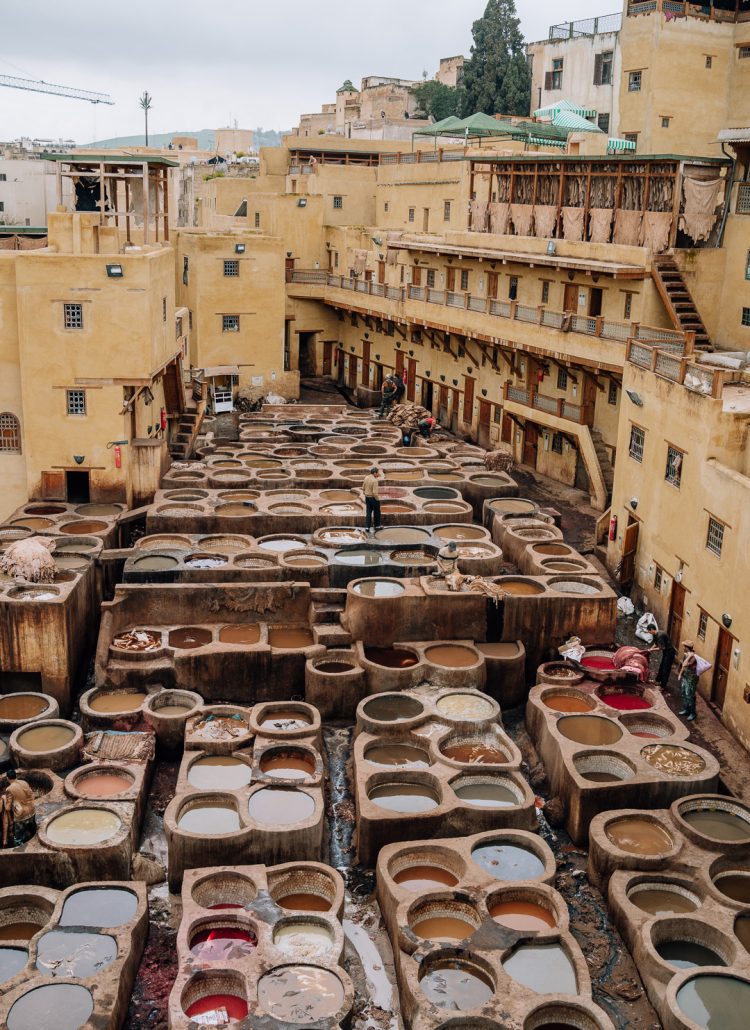 Morocco Travel Guide: Everything You Need to Know Before You Go 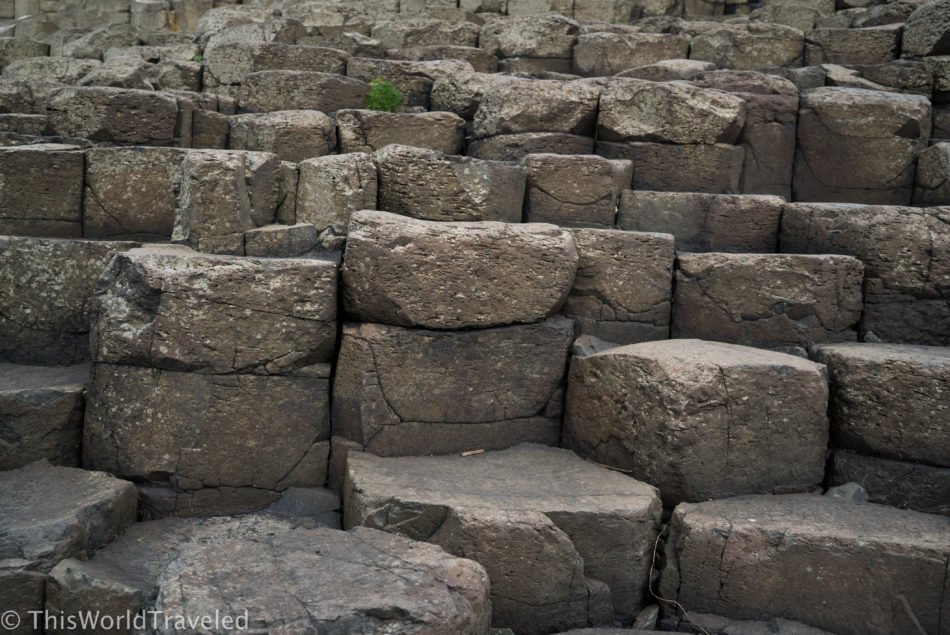